Aberdeen Art Gallery will re-open to the public on Saturday 2 November, it was announced today.

The date will mark the completion of a redevelopment project which has brought the most significant investment since it first opened in 1885. 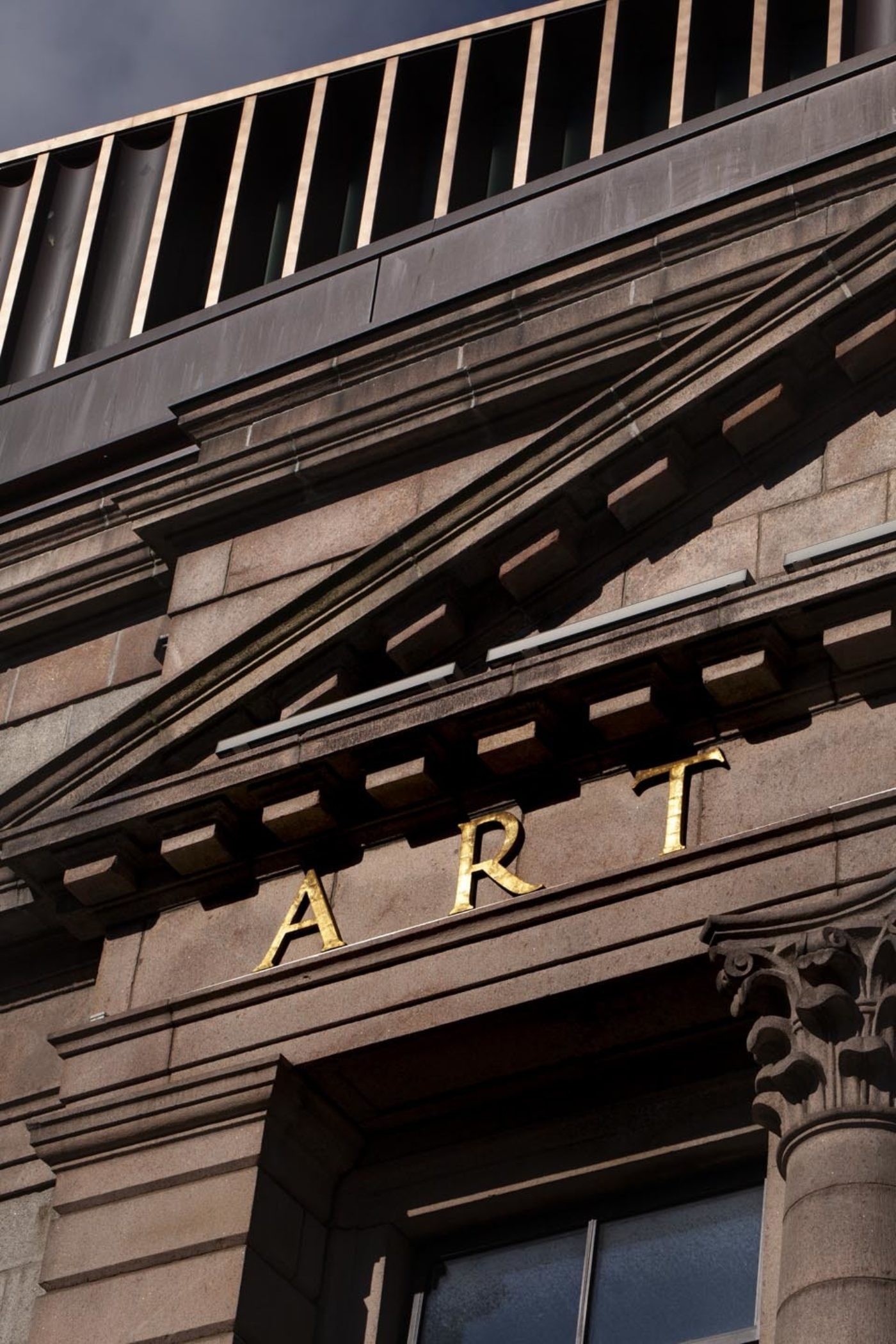 Aberdeen Art Gallery is home to one of the finest collections in the UK, including works by important Scottish artists, designers and makers such as Henry Raeburn, Joan Eardley, Samuel Peploe, Rachel McLean, Bill Gibb and James Cromar Watt, as well as nationally and internationally-acclaimed artists including Barbara Hepworth, Francis Bacon, Tracey Emin and Claude Monet.

A key element of Aberdeen City Council’s City Centre Masterplan, the project is transforming the Art Gallery, Cowdray Hall and Remembrance Hall into a major cultural attraction which is expected to attract around 250,000 visits annually - making it one of Scotland’s most-visited galleries.

Since work began in 2015, the Schoolhill complex of buildings has been completely reimagined and transformed by Hoskins Architects and exhibition designers Studioarc to meet both the needs of visitors and requirements for the care of the nationally recognised art collection. 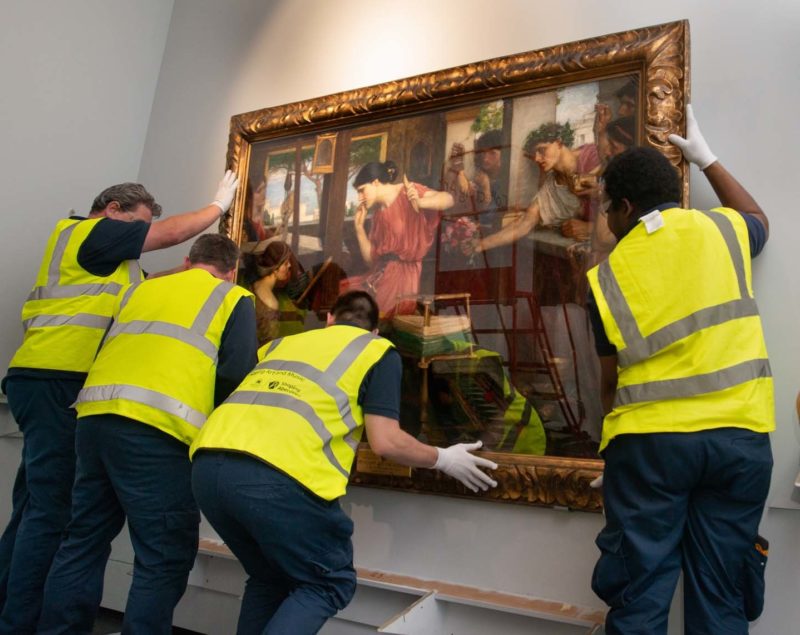 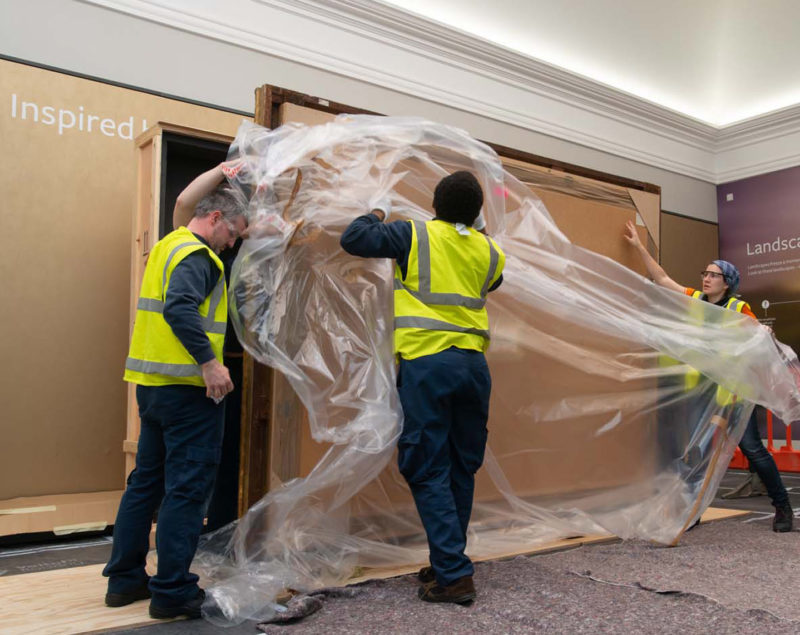 The £34.6million project includes investment in the fabric of the buildings, new exhibition and display galleries, improved visitor facilities and an enhanced activity programme.

- Restoring and modernising the Grade A-listed building and significantly improving access and way-finding for all visitors, including creating level access from Schoolhill and opening up vistas throughout the building as well as views across the city from the new second floor.

- Re-interpreting the collections to provide a more enjoyable and enriching visitor experience, including the use of digital interactives and personal in-gallery playlists.

- Repairing and modernising the Cowdray Hall, preserving its celebrated acoustic and enhancing its status as an excellent small-scale concert venue.

- Refurbishing the Remembrance Hall and re-establishing it as a quiet place for reflection, honouring lives lost in conflict. 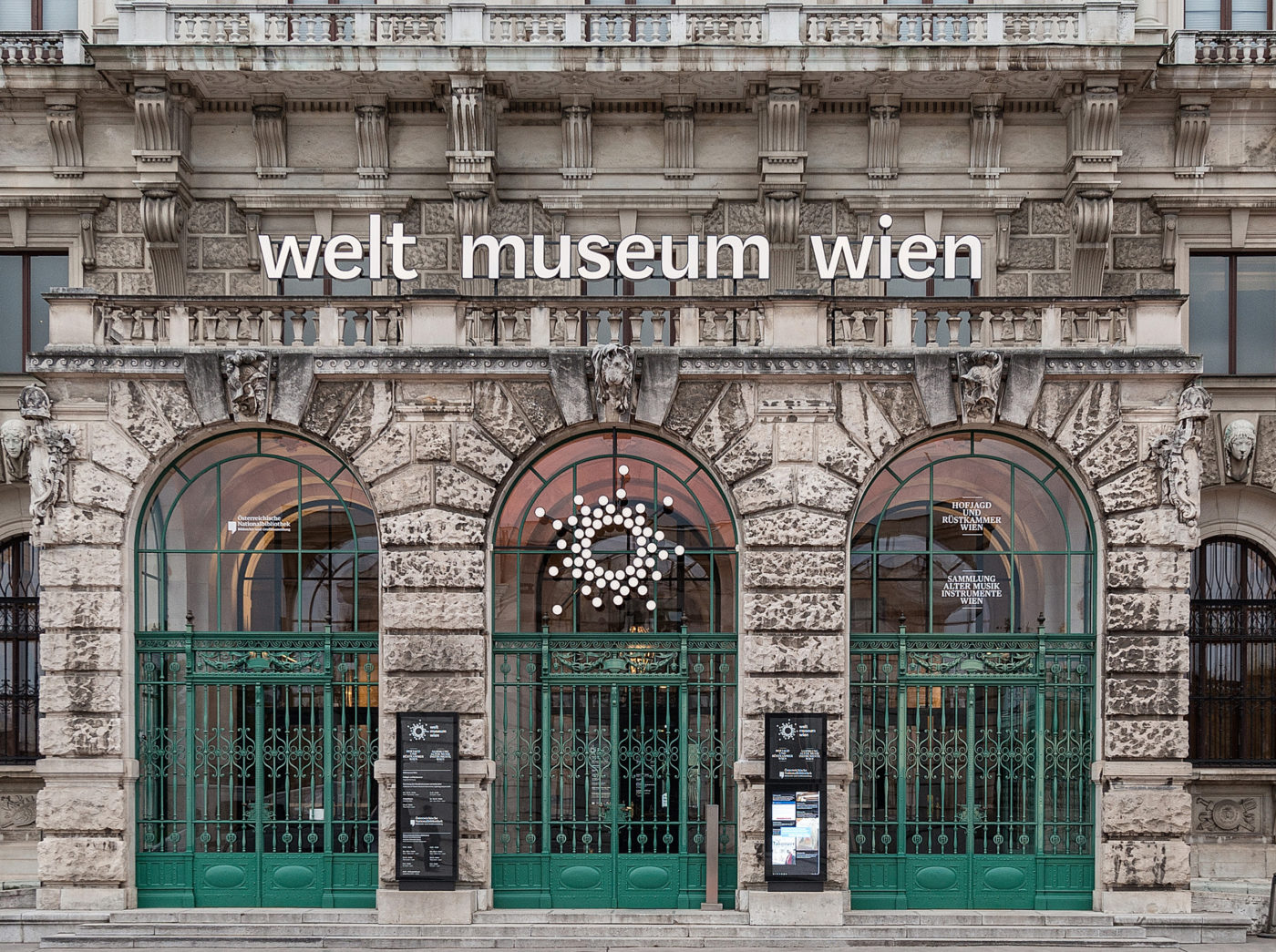 EMF/EMYA is dedicated to promoting excellence in innovation and public quality in museum practice, encouraging networking and exchange of ideas and sustainable best practices within the sector. EMF/EMYA works within an overall framework of a commitment to citizenship, democracy and human rights, to bridging cultures and social and political borders, and to sustainability.

At the 2019 Award Ceremony, held in Sarajevo, Bosnia and Herzegovina on 25th May the winners of the following five awards were announced: 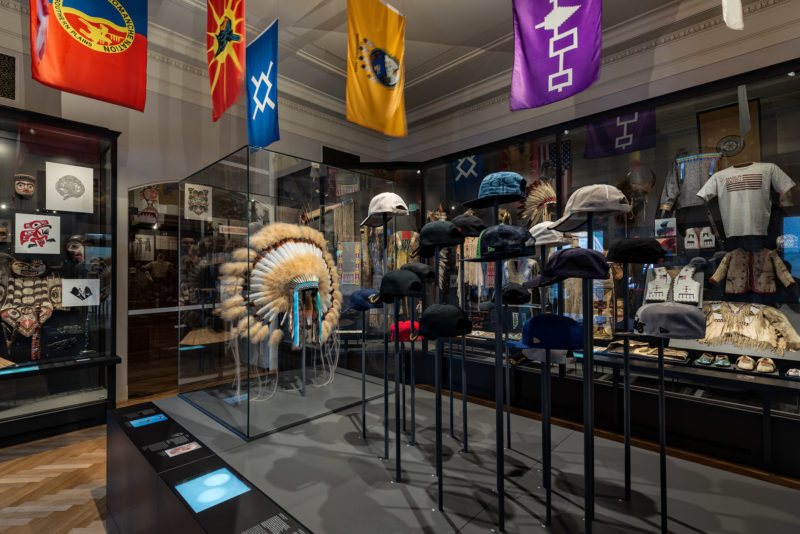 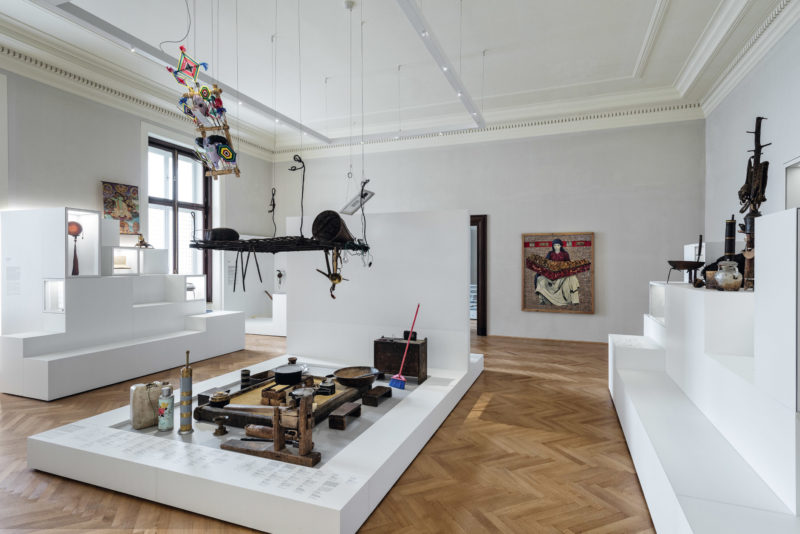 Our heartfelt congratulations go to our friends at Weltmuseum Wien who were announced as winners of the Kenneth Hudson Award.

The EMF describe The Kenneth Hudson Award as “an award in honour of the founder of EMYA. The award goes to a museum, person, project or a group of people who have demonstrated the most unusual, daring and, perhaps, controversial achievement that challenges common perceptions of the role of museum in the society and carries forward the spirit of Kenneth Hudson. The Kenneth Hudson Award winner is chosen by the EMF Board of Trustees, and is not necessarily selected from the pool of the EMYA applicants.

Of the Weltmuseum, they state: “Few European museums face in depth the colonial past or address its continued legacies in the 21st century. With unique intellectual honesty, the Weltmuseum acknowledges the dilemmas embedded in its collections and strives to create a new identity as a contemporary museum that celebrates the cultural abundance of the planet and promotes respect for human rights, integration, and intercultural coexistence.”

Our congratulations also go to all other winners; further details are available on the EMF website:

On Thursday 7th February Director Gordon Gibb and Project Architect Kirsten Stewart had the pleasure of attending a Gala Dinner held by National Museums Scotland in celebration of the completion of the 15-year masterplan to transform the National Museum of Scotland. In this piece, originally written for the event programme, Gibb gives an account of the project he came to oversee and that so many from our studio had a part in. 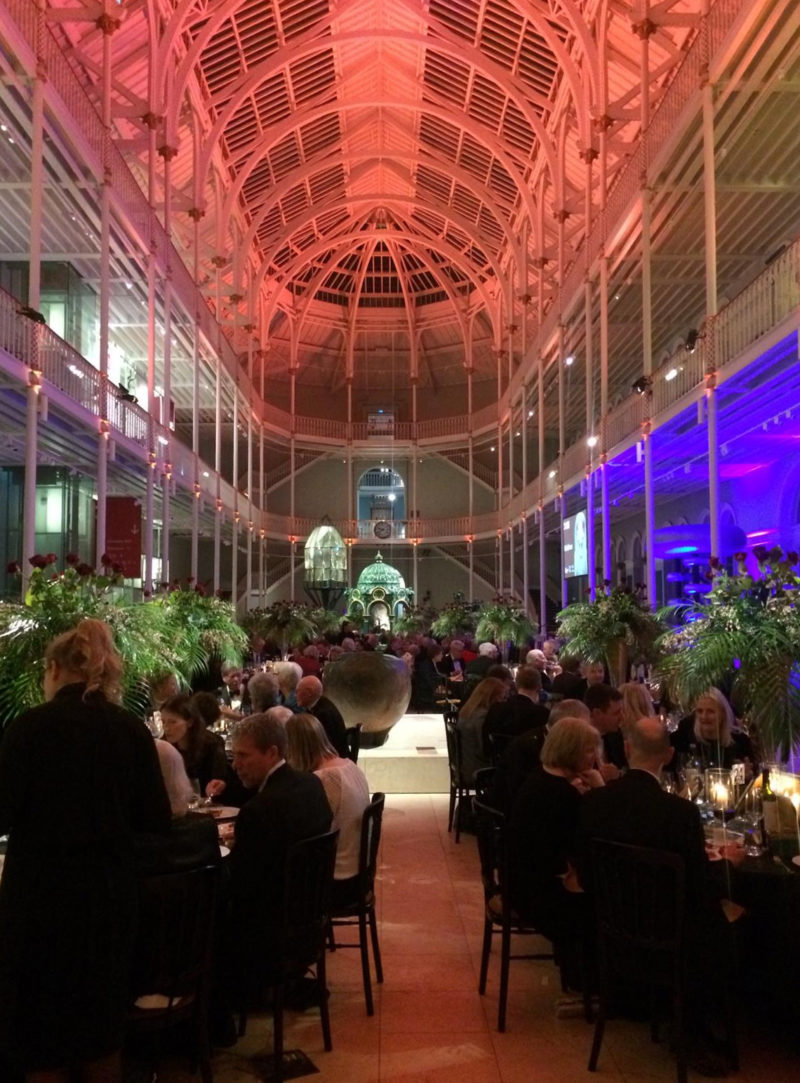 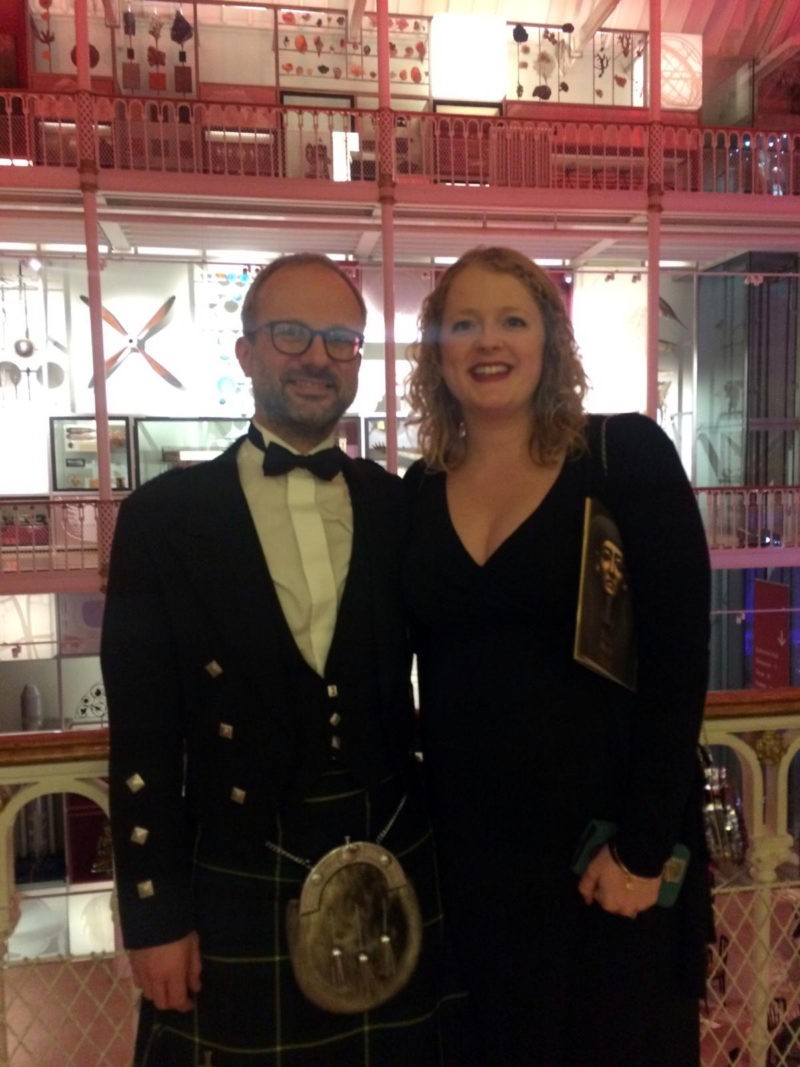 A Museum for the 21st century

The National Museum of Scotland is a glorious building and an inspiring place to visit. But at the start of the 21st century, the venerable Victorian institution had become rather faded, particularly in comparison to the striking new Museum of Scotland building which had opened alongside in 1998.

Architect Gareth Hoskins felt a strong personal connection to the Museum and was delighted when, in 2003, the Board of Trustees and Director Dr Gordon Rintoul announced his practice as the winner of the international competition to develop a Masterplan for the Museum’s transformation. It was a huge leap of faith on the part of the Museum to appoint a small, five-year-old, Glasgow-based practice in the face of a strong international field but there was an obvious meeting of minds.

Created with the involvement of New York and London based museum exhibition designers Ralph Applebaum Associates, the Masterplan laid out the way in which the Museum would be made fit for the 21st century. For this to happen, it had to be extensively re-imagined for the visitors of today. The original building would be restored to its former glory and better links created to the city beyond. The displays would be integrated with the architecture, and the whole museum made accessible to all, giving visitors a vastly enriched experience.

Fifteen years later, the transformation is complete. A visit now begins with a street-level entry into opened-up former cellars, the Caithness stone paving blurring the distinction between the museum inside and the public realm and new piazza outside. Light filters from above, drawing visitors up to the extraordinary 19th-century Grand Gallery, ‘a birdcage of glass and iron’. From here, visitors can see the whole Museum, the five-storey ‘Window on the World’ and glazed lifts drawing the eye to the upper floors where in the past few visitors explored. Large exhibits such as a giant elk, a feast bowl from the Pacific and the statue of James Watt signpost the galleries beyond.

Previously blocked up arches and doorways have been reopened to recreate sight lines that run the length of the building. These new views entice visitors to explore further and make orientation easier. The transformation has enabled many thousands more objects to be put on display, shared in imaginative and exciting ways with the Museum’s millions of visitors.

Sadly, Gareth Hoskins died in 2016, at the early age of 48. Winning the original competition was a massive step forward for the practice and for Gareth personally. He had a vision for the Museum that matched the ambitions of the Director and Board of Trustees. The transformation of the National Museum of Scotland remains one of the most important projects in Hoskins Architects’ portfolio and is one of which Gareth was immensely proud. 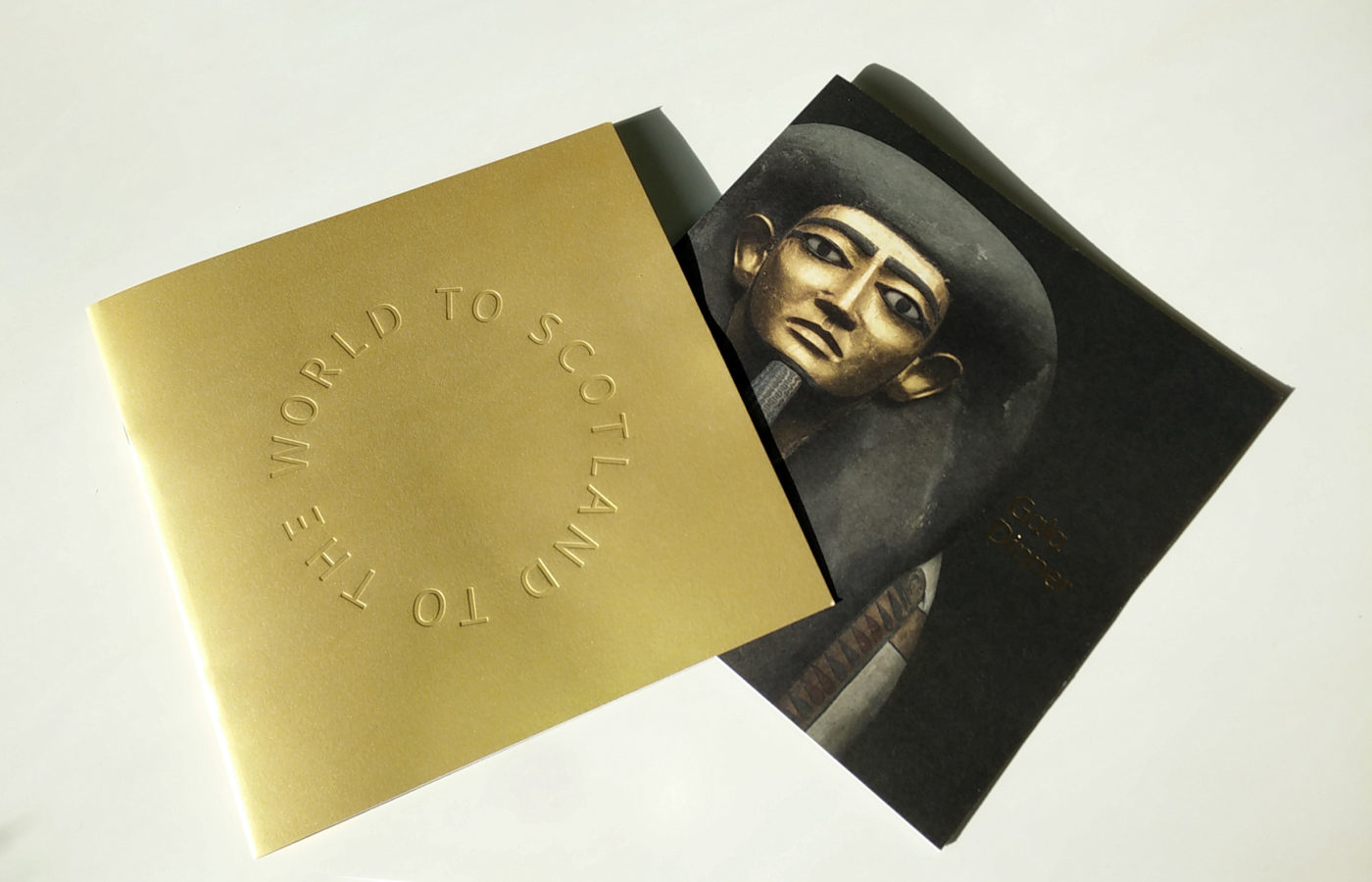 Hoskins Architects has submitted a planning application for an extension to the award-winning Grassmarket Centre, originally completed by the practice in 2013 and thriving home to the Grassmarket Community Project since. The two-storey extension will deliver increased and improved teaching facilities for the provision of support and social enterprise for vulnerable citizens in the area. The highly popular café will also be expanded, in a move to ensure the vital income streams necessary for the charity to continue to operate and prosper.

In plan, the extension is angled so that a generous opening to the street, providing a welcoming approach to the building, is maintained. Taking its design language from the 2013 building the internal corner, where the extension meets the existing building, is formed by continuing the glazed curtain walling to create an open façade, allowing light and views in. The street-facing edge is, conversely, formed of solid metal cladding to reflect the solidity of the adjacent building while contrasting with the rough, porous texture of the stone and creates a striking street presence for the Grassmarket Centre. This solid piece is punctured by a single window, allowing a view into the café space to publicise its function and entice visitors. The project is to be completed with a minimum of disruption to the operation of the Centre, in order that the important service provided to vulnerable members of society is continuous.

Grassmarket Community Project takes an innovative approach to creating community and providing sanctuary and support to participants, many of whom are amongst the most vulnerable of our citizens. Through mentoring, social enterprise, training and education in a nurturing environment, the Project develops skills which enable participants to develop to their full potential and move away from cycles of failure. 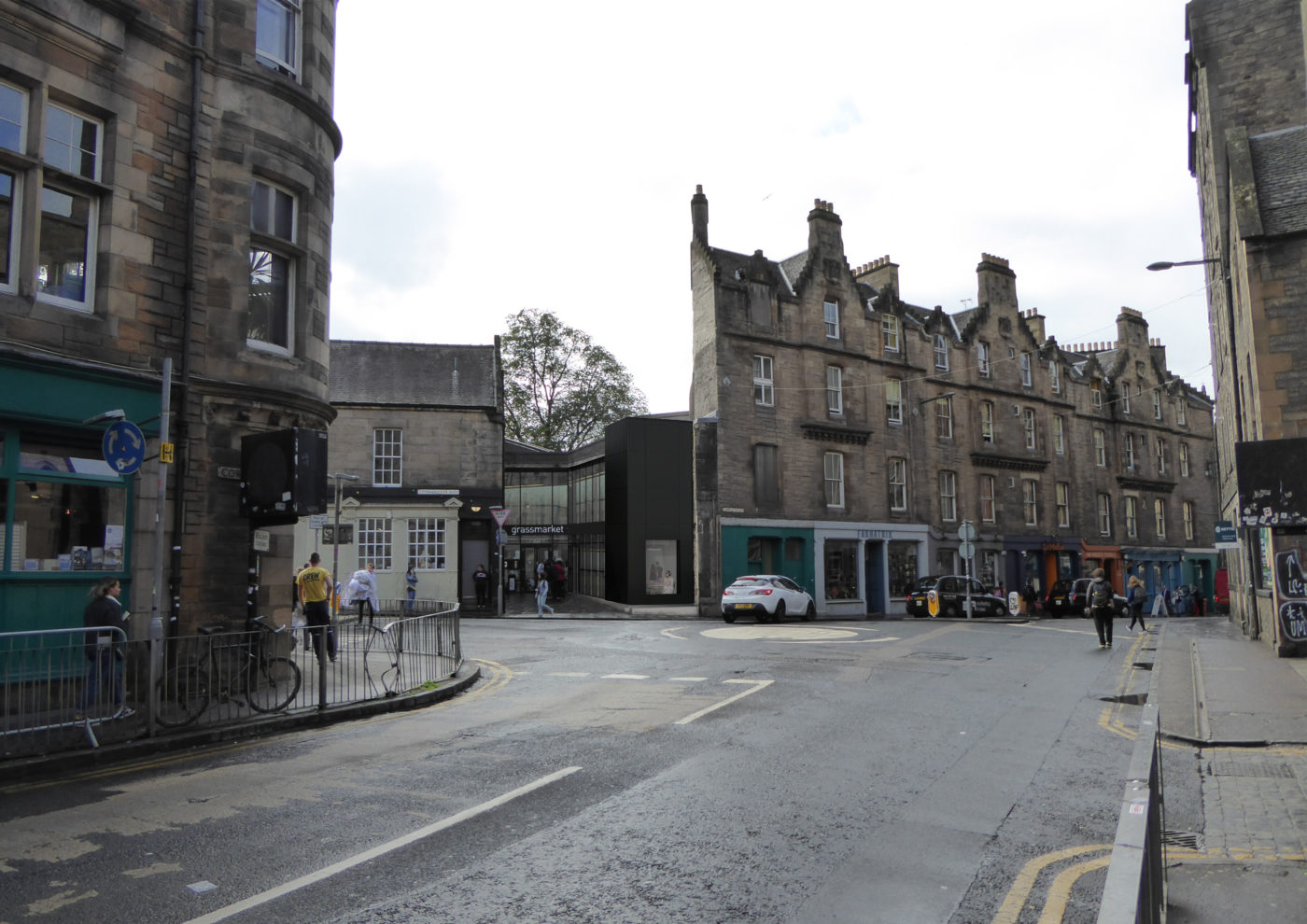 We continue to nurture the ethos of inclusion, creativity and enthusiasm in the practice he established over 20 years ago. 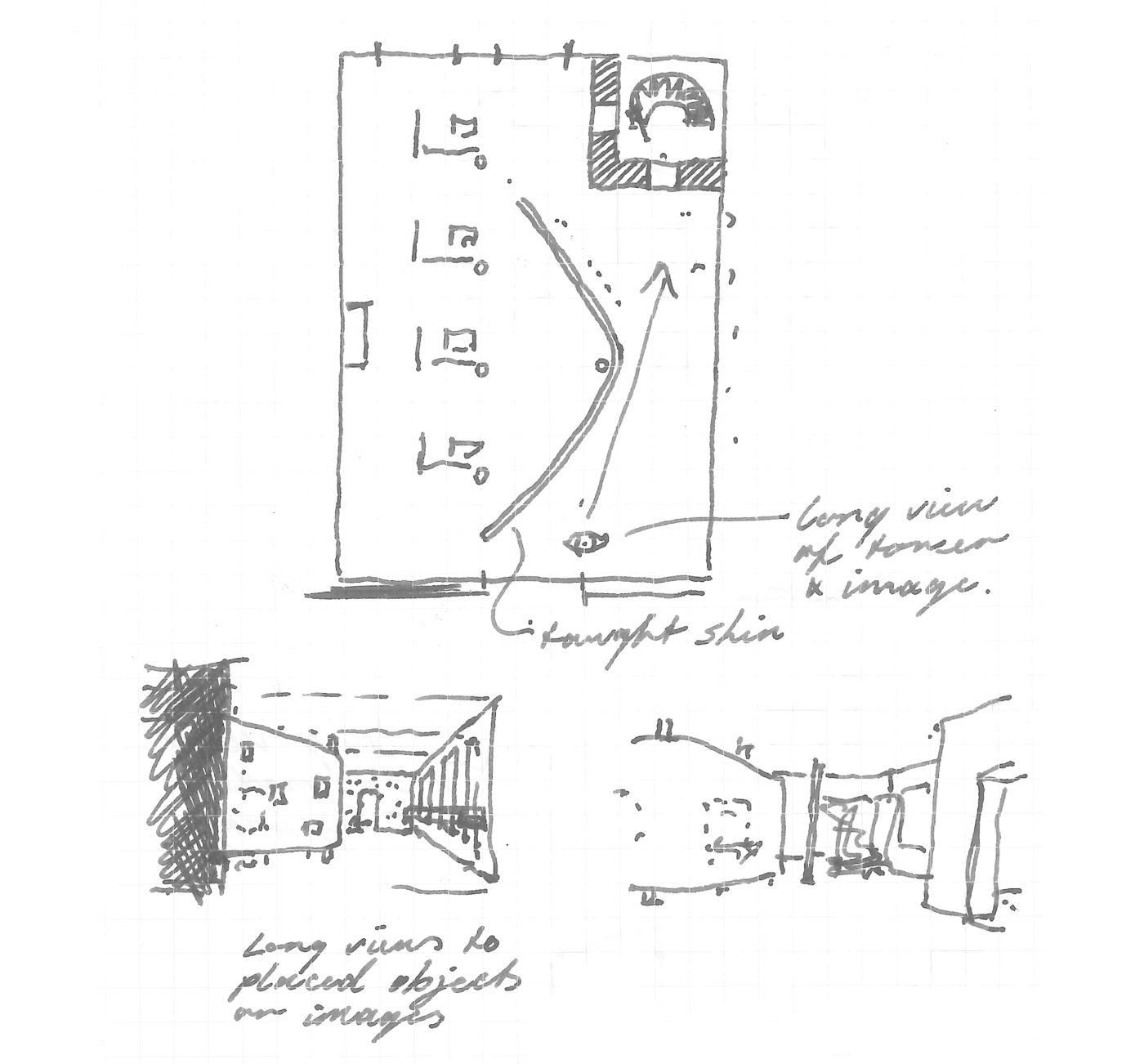 (sketches for Mackintosh gallery at the Lighthouse, 1998/9) 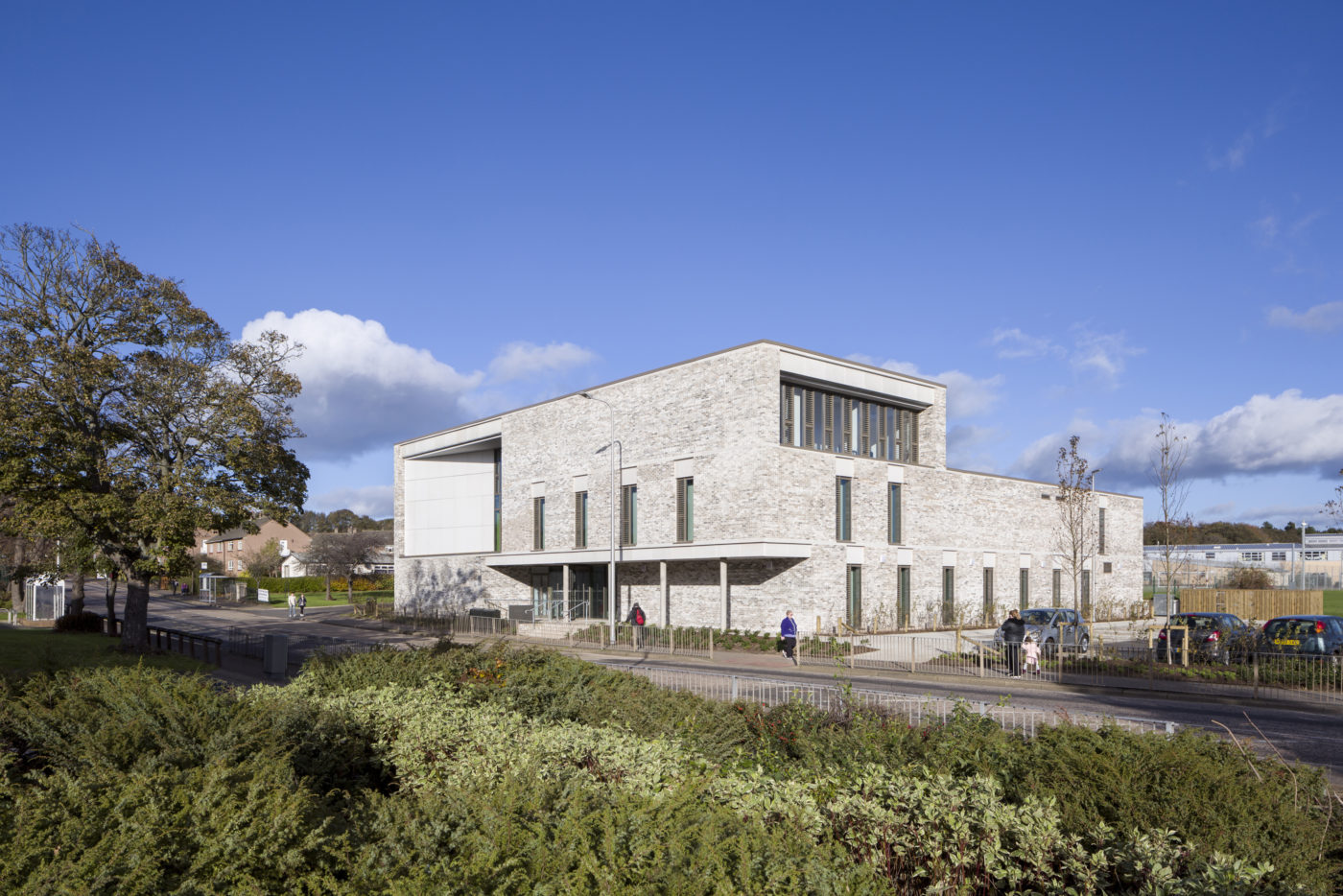 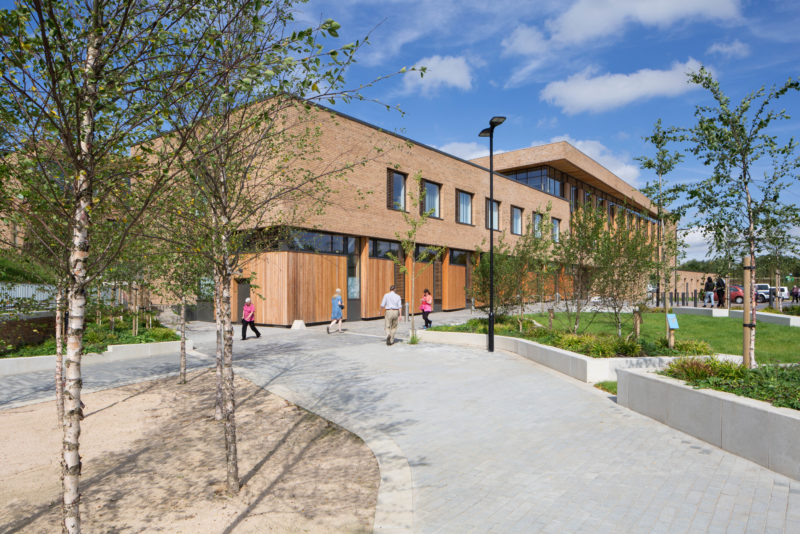 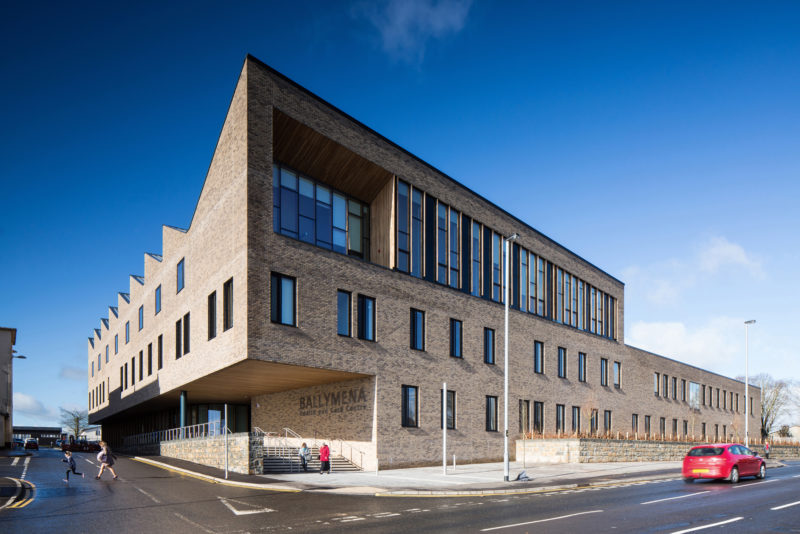 What all of the projects share is a client that understands the positive influence good design can have on the way patients access care.