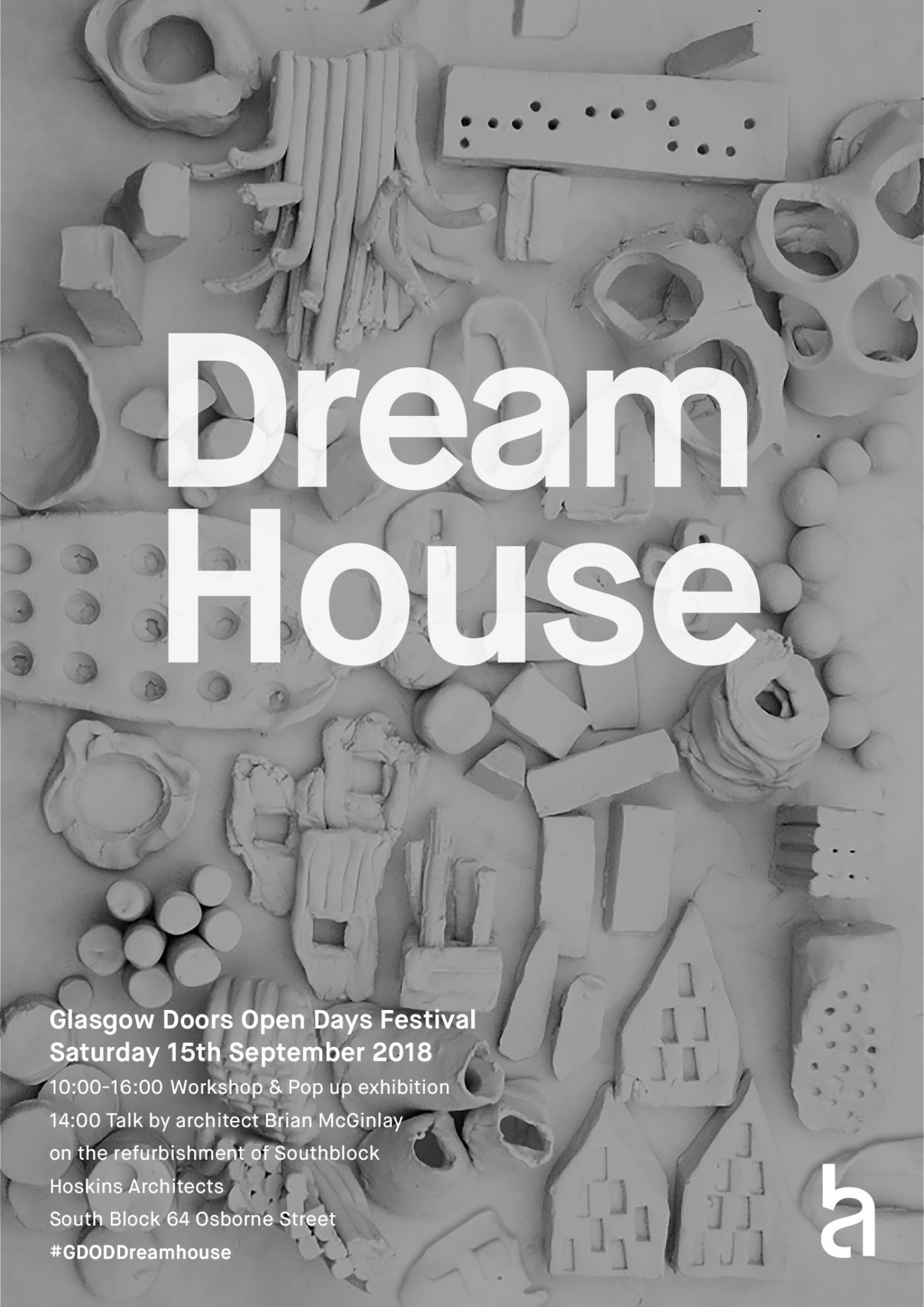 Be it an underwater tower block, a bungalow in the sky or Chewbacca's holiday home - get designing!

Visitors will have the chance to design & model their own dream house from plasticine which will become part of a large landscape that is constructed over the course of the day. Hoskins Architects will use the process to explain how the design of buildings and the spaces between them can contribute to improving our lives. The activity is targeted at all ages, skills and abilities.

The workshop is accompanied by an exhibition of houses by MacKay-Lyons Sweetapple Architects & Hoskins Architects, first shown at the Royal Scottish Academy in 2016.

In addition, at 2PM in the gallery space, architect Brian McGinlay will talk about the award-winning refurbishment of SouthBlock, undertaken by Nord Architects on behalf of Wasps Studios.

All materials will be provided. Children are required to be accompanied by an adult. Booking is NOT required. Places will be allocated on a first come first served basis on the day.

Work has begun on a new Hoskins Architects designed centre at Strawberry Field, Liverpool, where John Lennon once played as a child. The project, being undertaken by church and charity The Salvation Army, will see the creation of the first ever visitor facilities on the world-famous site, alongside a vocational training and work placement hub for young people with learning disabilities and is expected to complete in the summer of 2019. 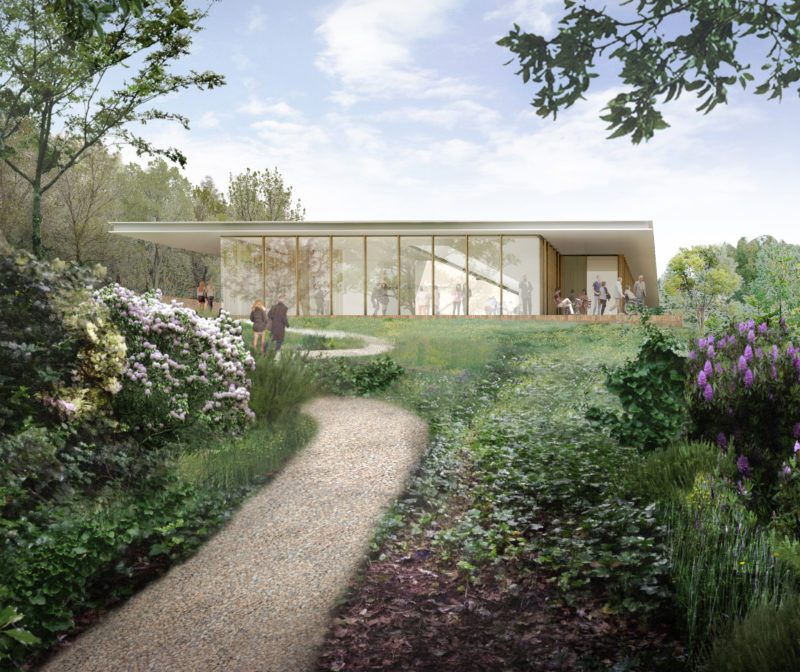 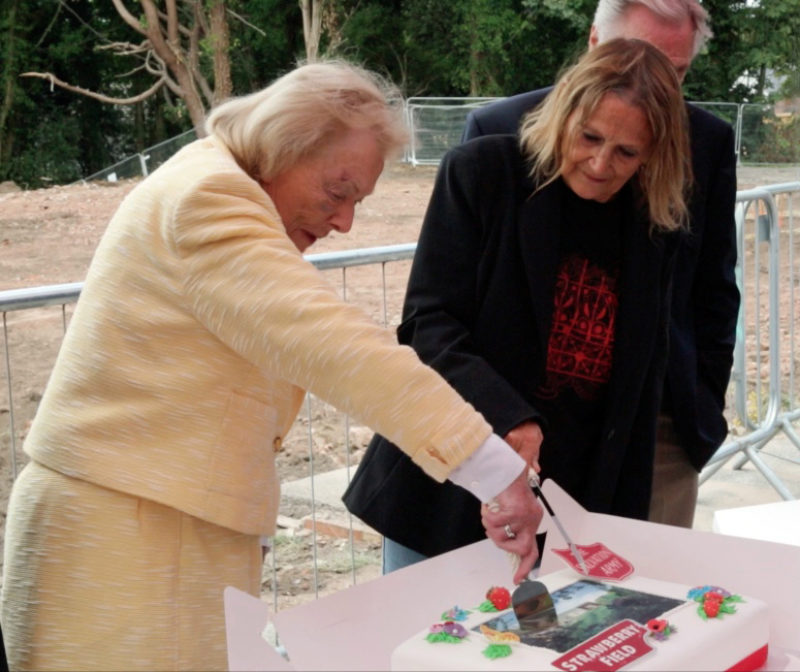 The 1,350m2 building has been designed to maximise views and physical connections to the mature ‘park’ setting. The visitor attraction, telling the story of Lennon’s childhood connection with Strawberry Field, will be located to the north of the site, visible from the famous red gates at Beaconsfield Road and comprises exhibition area, glazed shop and café. The ‘Steps to Work’ training facility will be located at the more private, southern end of the site.

Generous shared stairs at the heart of the building are designed to encourage interaction between building users, while a large over sailing roof plane will create sheltered edges and physically unite the elements to create a pavilion in the park.

A ground-breaking ceremony took place on the 31st of July, with Major Roger Batt, The Salvation Army Divisional Leader welcoming Julia Baird (John Lennon’s sister and Honorary President of the Strawberry Field project), Lady Judy Martin OBE, Cliff Cooper (Founder and CEO Orange Music Electronic.co) and young adults who are amongst the first group of trainees to pass through the Steps to Work placement hub.

More information on this worthwhile project, as well as information on how to support it, can be found on the dedicated website at:
http://www.strawberryfieldliverpool.com/

In the same week construction work began on-site on the much-anticipated Birthplace Project to transform The David Livingstone Centre into a world-class visitor attraction in Blantyre, the civil parish in South Lanarkshire, Scotland, after which Malawi’s second largest city is named.

Hoskins Architects has been working with the David Livingstone Trust to restore and renovate the site which includes the iconic Shuttle Row mill-workers’ tenement where the legendary explorer and missionary was born and raised. 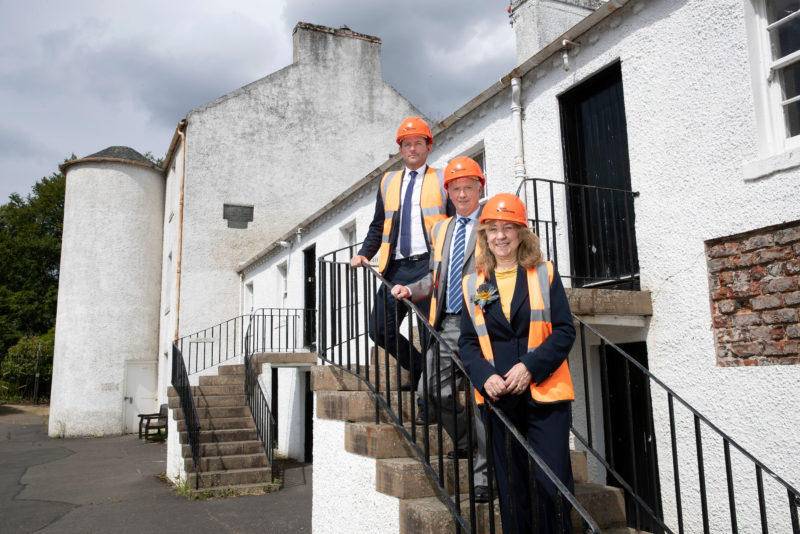 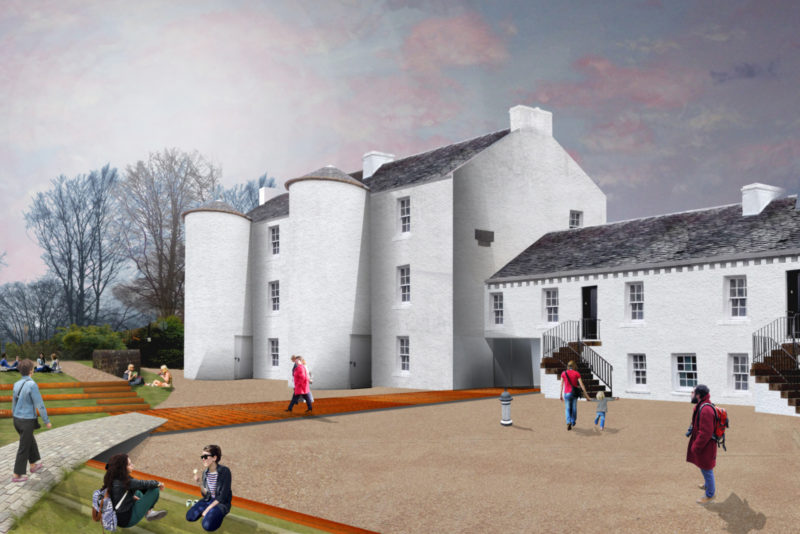 The Birthplace Project is jointly funded by The National Lottery through The Heritage Lottery Fund, the Scottish Government and Historic Environment Scotland. The funding will see David Livingstone’s birthplace redeveloped to provide a vibrant new museum, setting Scotland in a global context and celebrating the inspirational story of how a poor millworker became one of the most popular British heroes of the Victorian era and a hero of some Sub Saharan African countries today.

The project will include the renewal of the historic buildings, a newly interpreted exhibition which will showcase artefacts from the Trust’s collection of 3000 objects and an upgrade of visitor facilities such as the café and shop.

David Livingstone is considered to be of great international importance in terms of his contribution to science, exploration, faith and humanitarianism. Born in 1813 in a cramped mill home, Livingstone started his working life aged ten with 12-hour shifts in the cotton factory.

However, his passion for education, exploration and his deep faith led him to Christian missionary work and 30 years of exploring Africa, often in places where no European had previously ventured. His discoveries – geographic, technical, medical, and social – provided a complex body of knowledge that is still being studied today.

The respect he gained from Sub Saharan individuals, such as Chief Sechele of the Bakwain people, opened the door to missionaries who introduced education and health to the local people, inspired abolitionists of the slave trade, and influenced European and Western attitudes towards Africa.

Find out more about the David Livingstone Trust on their website:
https://www.david-livingstone-trust.org

Hand Over at hdgo, Vienna

Following on from our Weltmuseum Wien project, Hoskins Architects is currently overseeing completion of works in the neighbouring Neue Burg to create exhibition space for the new House of Austrian History (Haus der Geschichte Österreich – hdgo). The museum – the first museum in Austria to focus on contemporary history – will open to the public in November this year.

Operated by the Austrian National Library, the museum invites visitors to examine Austria’s history in concisely recounted and contemporary presentation. Starting with the foundation of the democratic republic in 1918, the exhibition focuses on social change and political fault lines. Questions aimed at the past yet relevant to the present aim to highlight courses of action for the present and future. Designed to be a discussion forum for the whole of Austria, the House of Austrian History attaches special importance to European and international networking. The inaugural exhibition, with the working title “Austria 1918 – 2018”, discusses the developments of the last one hundred years, showcasing exciting objects and encouraging an examination of the central themes of Austrian history. 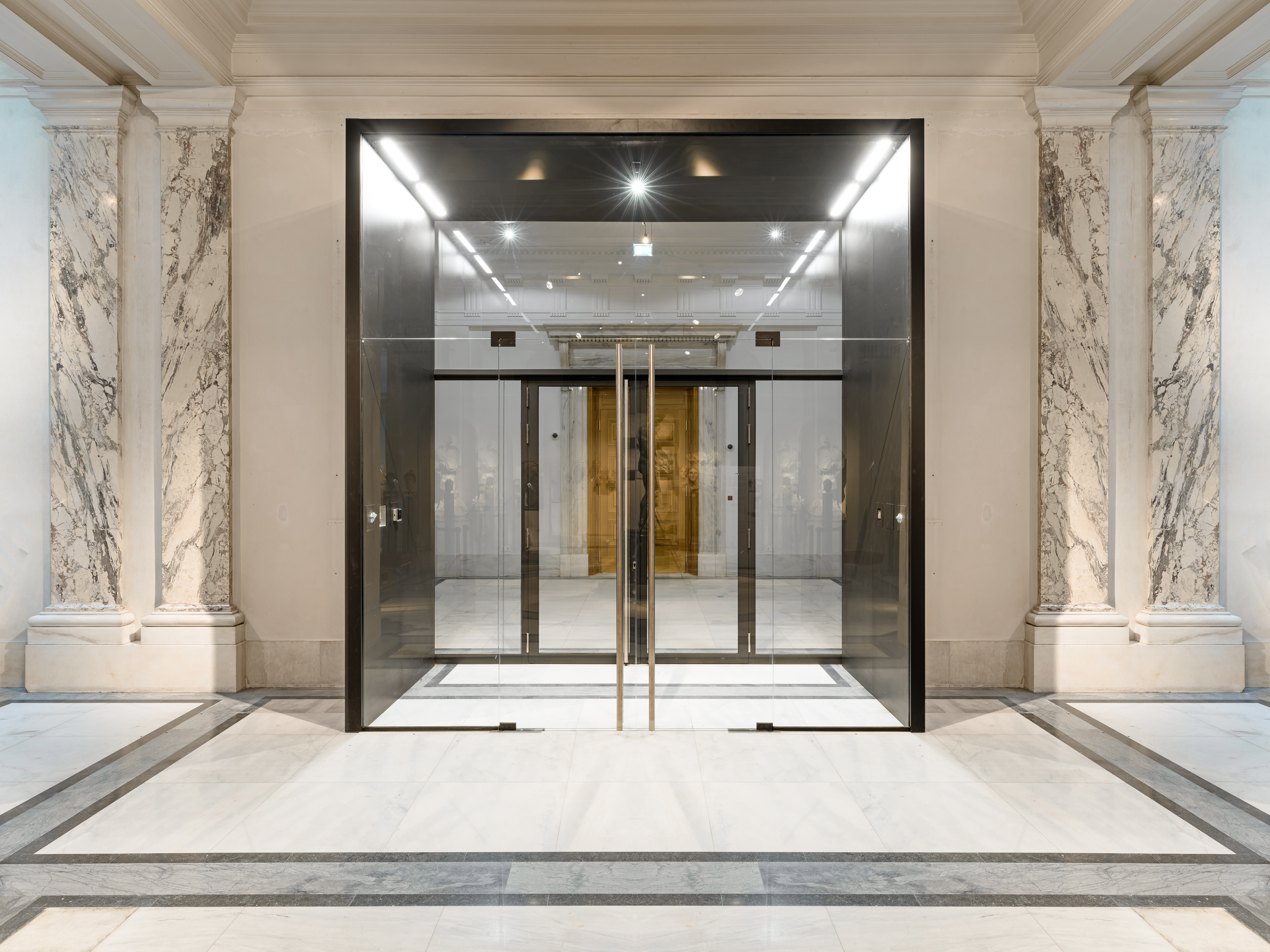 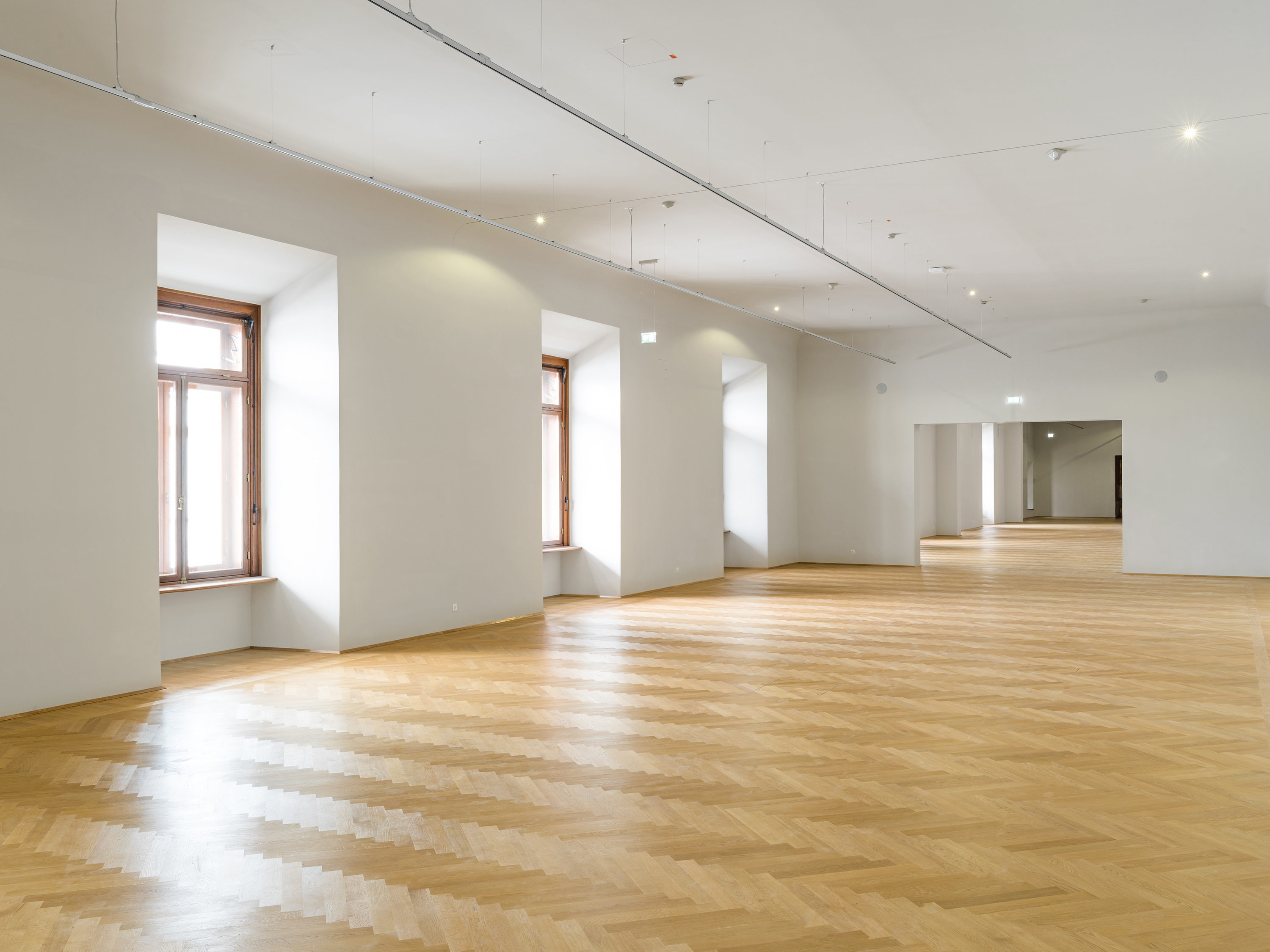 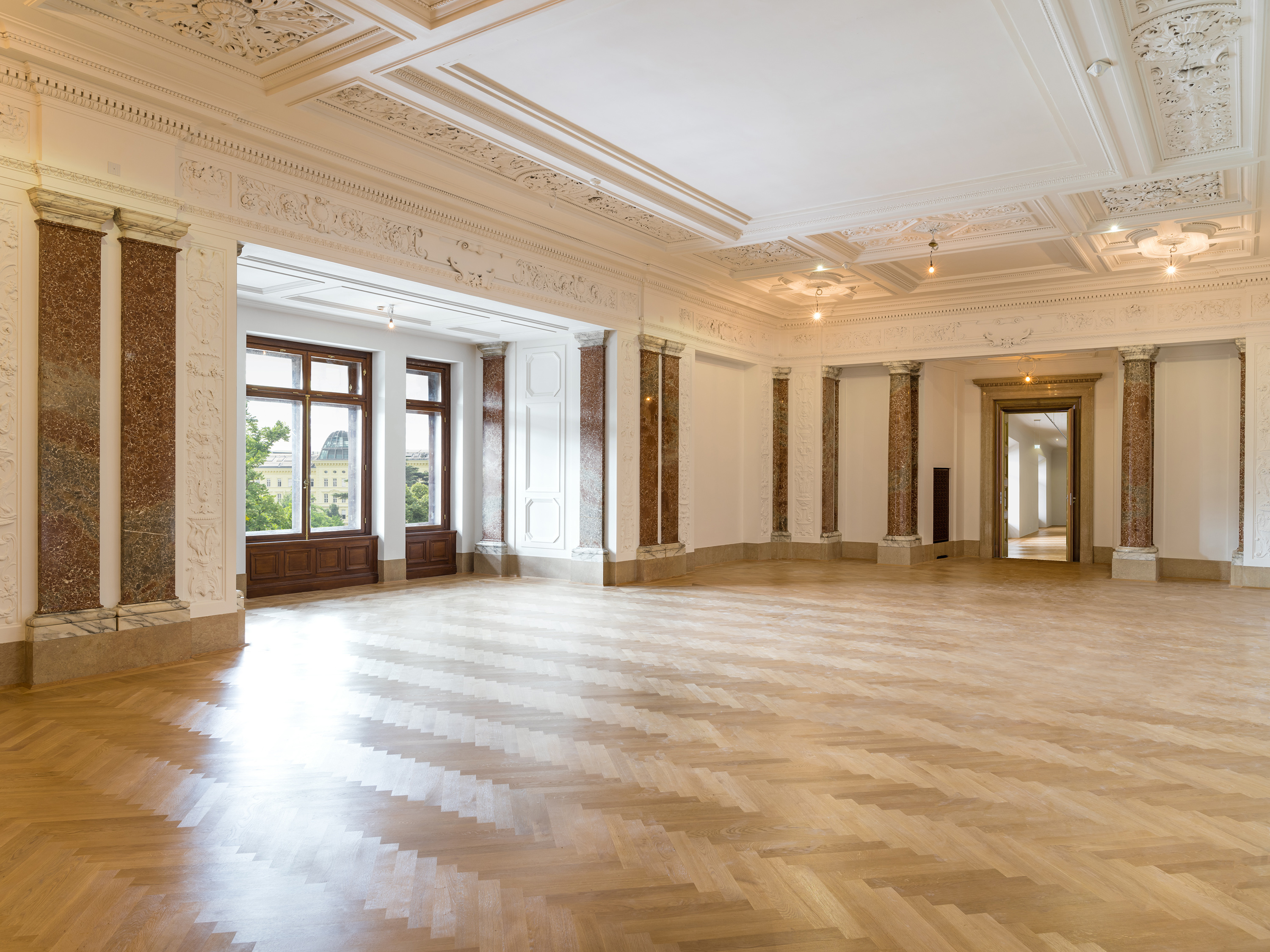 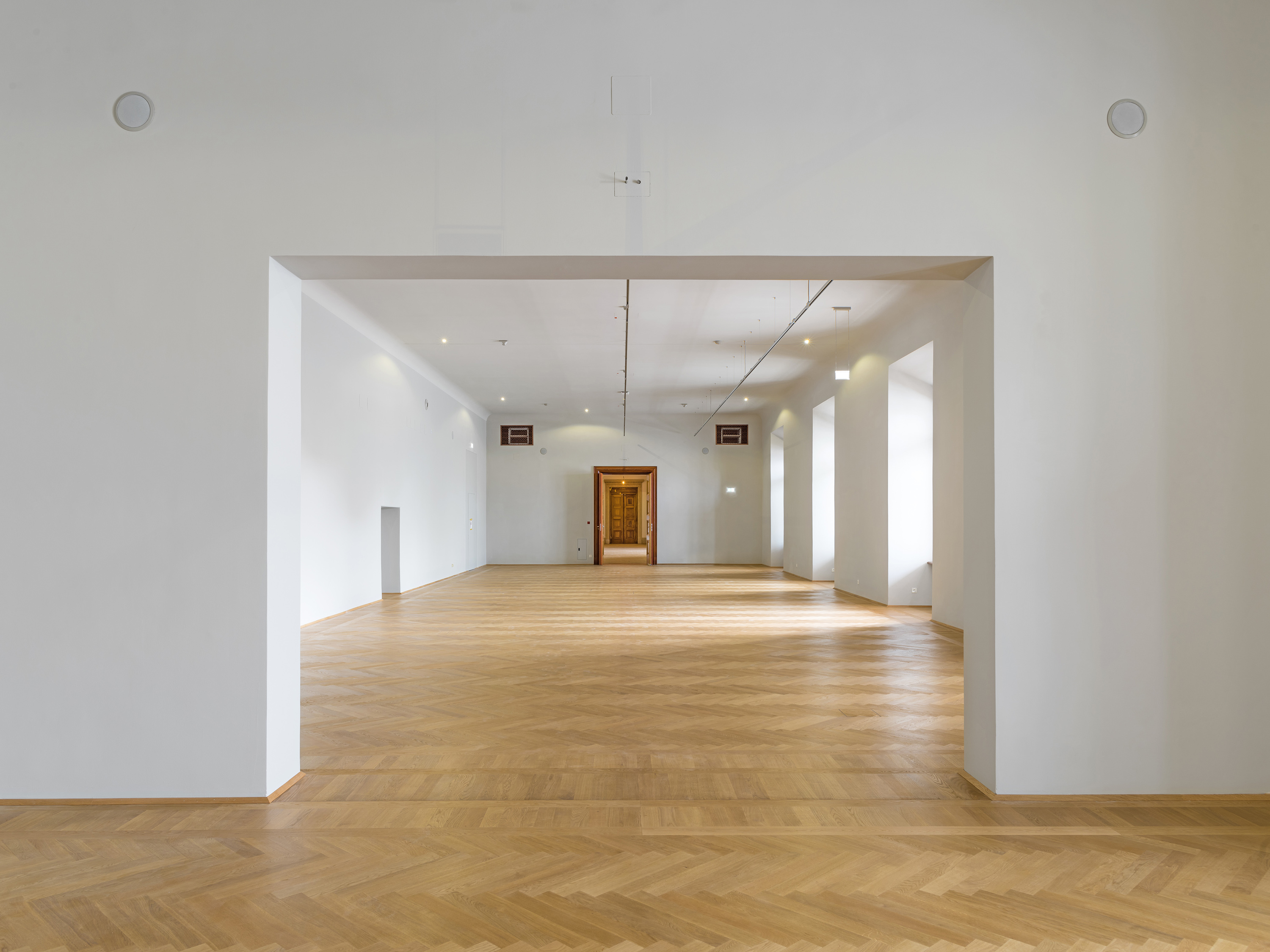 On Monday 26th July Hoskins Architects were delighted to hand over circa 1,800 m² of comprehensively renovated exhibition space to enable the museum to begin fit-out works for the exhibition, whilst continuing work on the wider elements of the project including the careful insertion of new access and escape routes into the historic fabric of the Neue Burg.

In April 2018, the consortium of Hoskins Architects (Design Architect), Ralph Appelbaum Associates (Exhibition Design) and Wenzel + Wenzel (Executive Architect) were awarded the Europe-wide tender for the renovation and conversion of the Fortress Marienberg into the Museum für Franken - Staatliches Museum für Kunst- und Kulturgeschichte in Würzburg (State Museum of Fine Arts and Cultural History). The project includes the internal restructuring and redesign of the entire core castle, an area of more than 17,000 m². The new permanent exhibition area of the Museum for Franken will comprise approximately 4,000 m². Additional space is planned for special exhibition areas, visitor infrastructure, a depot and administration.

Fortress Marienberg shapes the image of the city of Würzburg from afar. The origins of the fortress date back to the 8th century. From the 13th to the 18th century, the fortress was the seat of the prince-bishops of Würzburg. In the 17th century, the castle was expanded as a baroque fortress. Following heavy destruction during the Second World War, the post-war years saw the slow rebuilding and, in addition to museum use, the use of various sections by various institutions, including as State Archives and as a Conference Centre. As part of the conversion to the Museum für Franken, the entire fortress complex is gradually being renovated to meet the current requirements as a museum location and visitor attraction. Locating the Museum für Franken in the Kernburg, at the heart of the fortress, is the most important building block in these far-reaching plans.

The Museum für Franken was formerly known as the Mainfränkische Museum. In January 2017, it came under the responsibility of the State of Bavaria, who is financing the reconstruction work. Under the name Museum für Franken – Staatliches Museum für Kunst- und Kulturgeschichte in Würzburg, the museum will, when complete, present the history and culture of Franconia, a large region in south central Germany, including the history of the city of Würzburg and will extend the scope of its collection to the present day. The museum collections include, among others: the world's largest collection of sculptures by Tilman Riemenschneider (1460-1531); an important collection of paintings; an archaeological collection with evidence of prehistory and early history of Franconia; the highly significant Kilian banner of 1266; an extensive art collection with furniture, faience, gold and silver work from the Franconian area; and two impressive city models of medieval Würzburg and of the city destroyed by fire-bombing in 1945.

For Hoskins Architects and Ralph Appelbaum Associates, the project is the third collaboration on a major museum in a listed building following on from the Scottish National Museum in Edinburgh (2005-2016) and the Weltmuseum Wien in the Neue Hofburg, Vienna (2013-2017).

With Wenzel + Wenzel, an experienced partner has been found for the implementation of the project, who have already proven their quality in many museum projects, most recently at the Historical Museum in Frankfurt and the James Simon Gallery on the Berlin Museum Island.

The Uncommon Beauty of Common Things 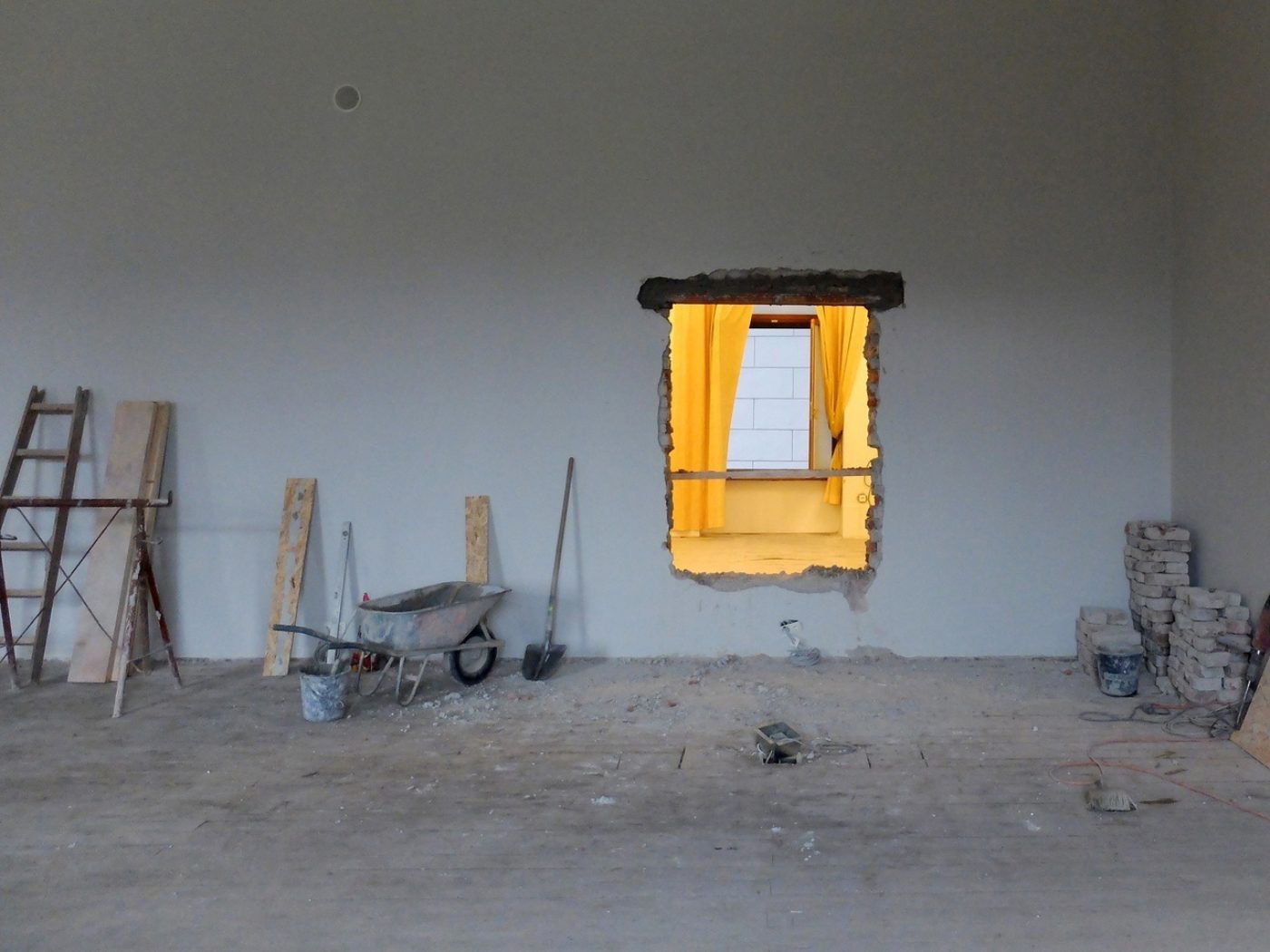 Charles and Ray Eames explored what they characterised as ‘the uncommon beauty of common things’ through a rich variety of media. The pleasures of everyday activities, familiar objects, and ordinary encounters were shown to have profound emotional and aesthetic significance, and this sensibility underpinned their design work. In this exhibition, Hoskins Architects brings together a wide range of friends and collaborators working across diverse fields, to examine through a variety of media the special potential of everyday things. The exhibition is part of the Architecture Fringe 2018 Programme and admission is free 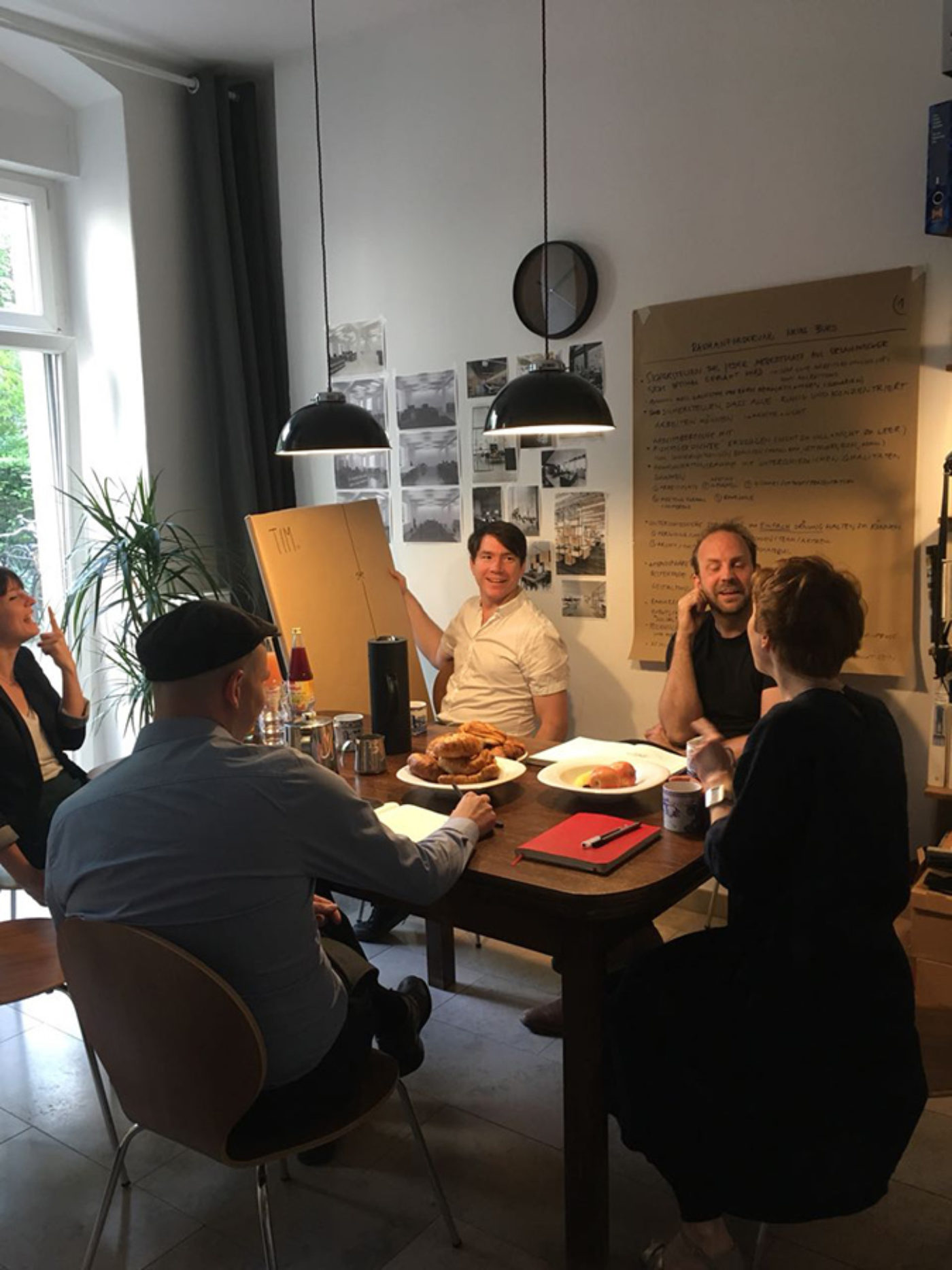 Our Berlin office was pleased to celebrate the 10th anniversary of our colleague Tim Harland at the tail end of May. After relocating from Australia to Scotland (for the weather, naturally) Tim joined the Glasgow office in 2008, working initially on 6 St Andrew Square, and proving an enthusiastic if ‘Antipodean’ addition to our football team. Later Tim worked on wide range of cultural and education projects, as well as competitions including our entry for Fort York in Toronto and Notre Dame & St Peter’s Primary School in Glasgow. He then focussed on projects in the healthcare sector, including our award winning Ballymena Health and Care Centre in Northern Ireland and Eastwood Health and Care Centre in East Renfrewshire.

In 2015 Tim moved to our Berlin office where he has worked on the Weltmuseum in Vienna as well as projects for Standard Life Investments in Hamburg and Frankfurt.